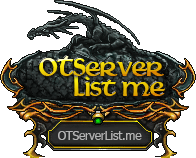 What is OTS (Open Tibia Server)?

Open Tibia (abbreviated as OT) is an open source role-playing game that allows people to create their own servers for the public to play. They may have unique content, brand-new maps, special features or even custom skill/level rates different than those in the original Tibia. Along with Open Tibia comes an Open Tibia community formed by players just like you who want to create something of their own. People within this community help each other, provide tutorials, contribute to the development of new and improved servers, among other things.

Open Tibia (Servers), often abbreviated as OT or OTS are Tibia game servers not hosted by CipSoft GmbH and are using open source technology created from scratch. They are illegal by the rules of Tibia and connecting to them using Cipsoft's Tibia client is illegal by law, however the Open Tibia servers can be legally used.

This is because your client must connect to the OT server, and not to the official game server. There is software available to do this. Open Tibia servers have often a changed game mechanism with a different loot rates (items are dropped more or less frequently), different experience rates (you gain your next level faster or slower), different skill rates (you gain higher skills faster or slower), custom NPC's, monsters, quests and so on. Some OTS's are even completly changing the gameplay. Mostly the map is also different than the usual tibia map, mostly smaller (but some maps are bigger than Cipsoft's one). Often the OTS owner offers premium accounts, items and other advantages for sale, for real life money.

What was the origin of Open Tibia Servers?

It started out as a fun project out of tibia.de with I think Tliff? being in the lead of it. OTs slowly evolved from there, small square pvp maps with no exhaust system etc. It slowly grew more and more with better systems, some basic quests on the pvp servers etc. At some point people started making bigger, better maps and actual accounts to progress on. Some 7.4 server were quite serious, like world of lastwar etc with really decent maps and lore. Real maps also started growing back then with people just mapping their own copies. Slightly later there were trackers where you walked around in-game to track the map and copy it for your OT server. Even later than that came the leaked files from 7.72, I don't think they were made available until later though? Oh yeah, and after the team on tibia.de there came a bunch of other teams making large scale distributions of their versions. The most famous ones are YurOTS and The Forgotten server (TFS). YurOTS was as early as 7.1 I think and started waning off around version 8.? TFS then took over as the main distro for widespread use. This is just a very short explanation and is surely lacking a lot, reservations for inaccuracies as this was written purely from memory in a couple minutes.